The measurement of moisture traces in gases is indispensable for many medical and technical applications. The requirements for gases and gas mixtures are becoming ever greater as developments progress, especially in new technologies.

In the following, we present the most important methods for determining the residual moisture in gases and give a brief overview of basic terms in moisture measurement.

The dew point or the dew point temperature describes a temperature point which must be undercut in air with a certain air humidity and constant pressure so that the water contained in the gas condenses. At this point, the relative humidity is 100% and the air is saturated with water vapor. Warm air can absorb more water vapor, so the dew point is higher. The opposite is true in cold air. We notice this in the warm summer and vice versa in the cold winter months.

The relationship between dew point temperature [°C] and trace moisture in Vppm is not linear, but exponential. The following graph should help to get a better understanding between these measurands:

The following graph should help you to gain a better understanding between the trace moisture [ppm] and the dew point temperature: 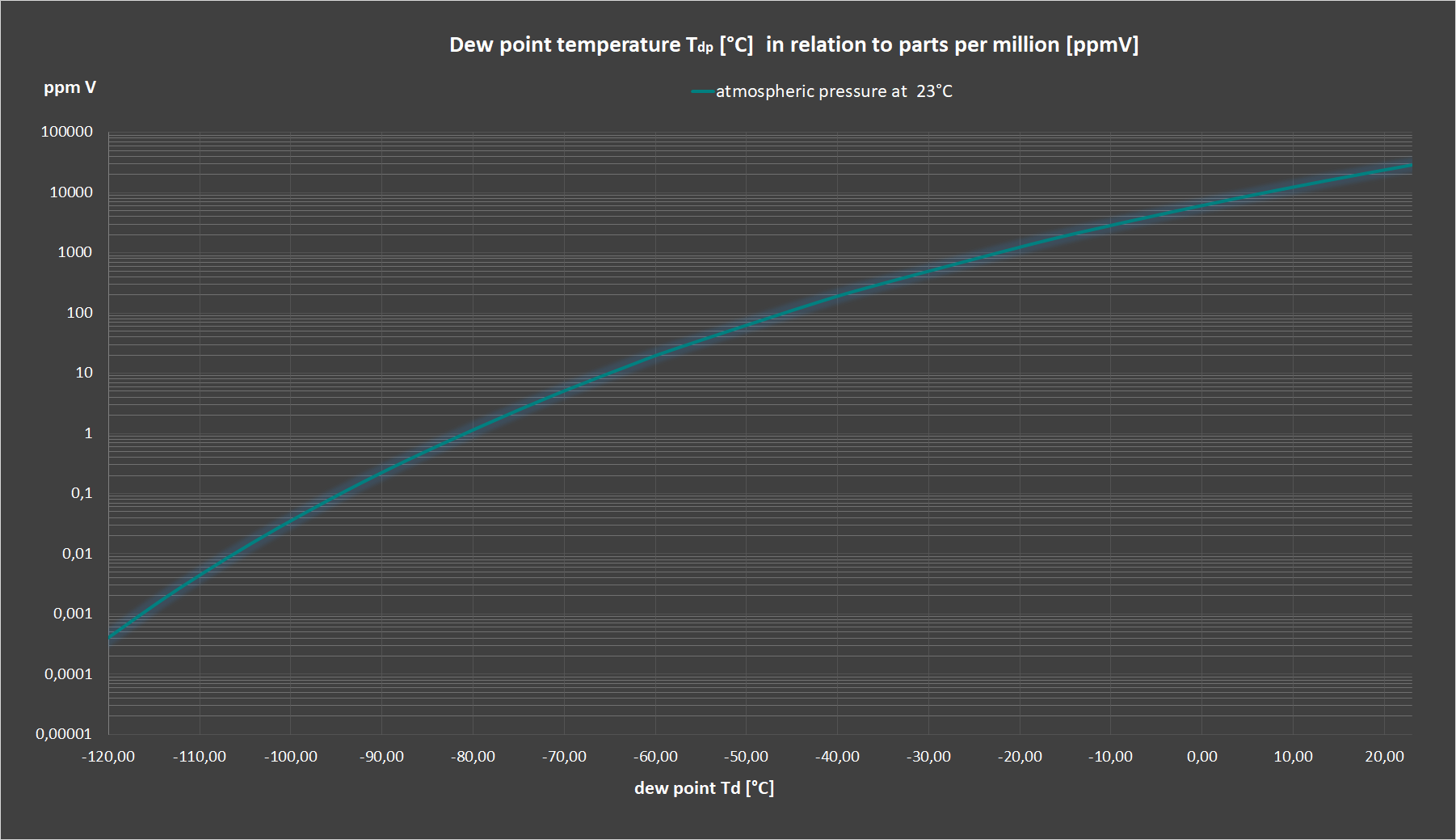 The most common and well-known measurement methods are presented below: 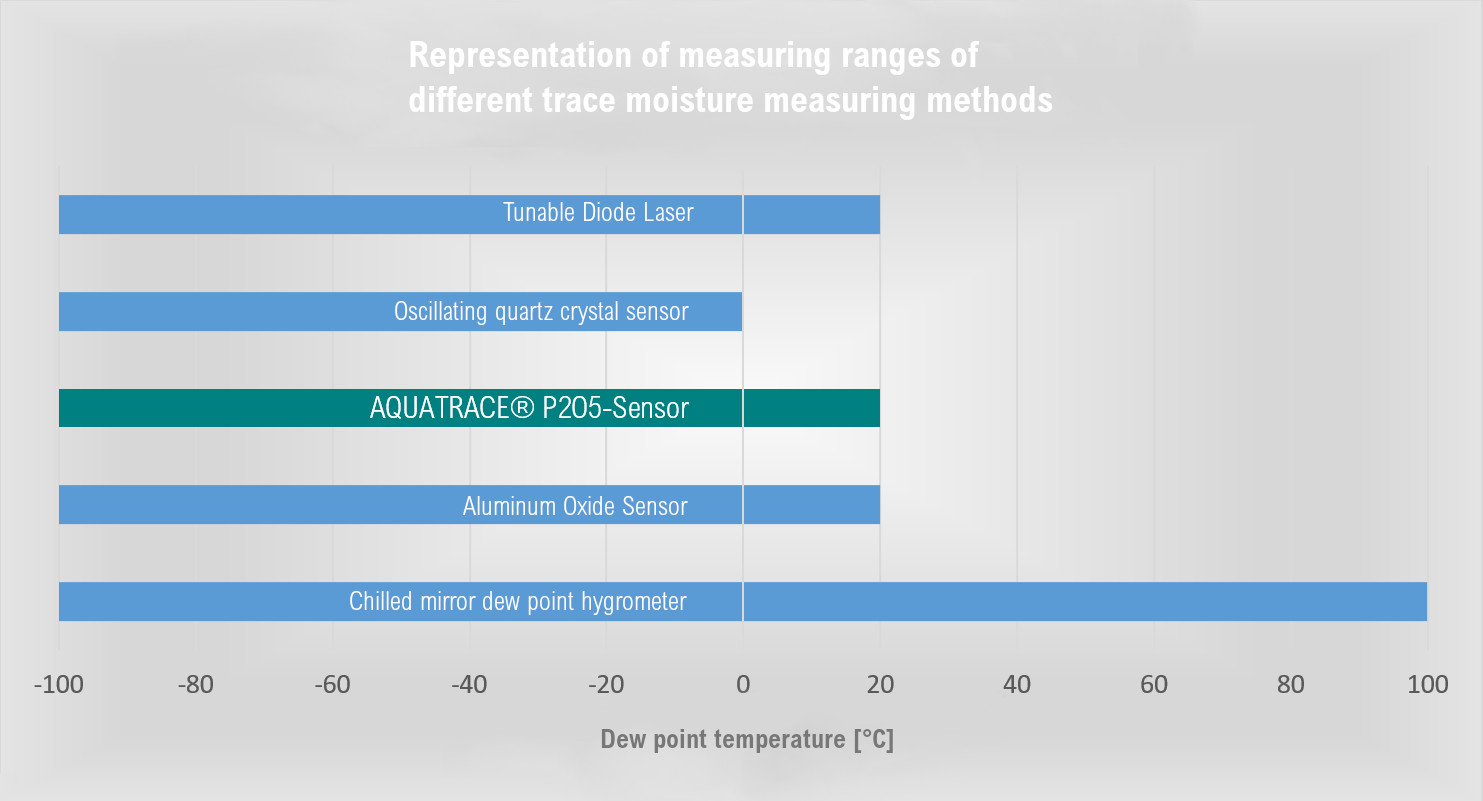 The TDLAS method (absorption spectroscopy by means of tunable laser diodes) is often used for the determination of pollutant concentrations. In the past few years, also increasingly for determining residual moisture, especially in corrosive gases. The concentration of the gas to be examined is determined here from the measured absorption of the light. A laser diode is used as the source. This method has advantages in that reliable selective measurements are possible even with interference components. The diode light passes through the measuring cell twice and is then detected. In front of the so-called measuring cell there is a beam splitter which directs a small part of the focused light into a reference cell. Here the wavelength is stabilized. This is essential for the accuracy of the measurement. The complex structure is disadvantageous. The purchase price is also relatively high. It is a non-contact measurement method. Like our robust P2O5 sensor, the method is suitable for gases with corrosive components.

Al2O3 (aluminum oxide) is most frequently used here. Due to its interactions with water, the oxide is considered a sensitive layer and is used for moisture sensors. The water accumulates on the surface of the metal oxide. The sensor is built up in two layers. The base electrode is made of aluminum on which the porous oxide layer is applied. The best way to compare the sensor is to due that with a capacitor. A water-vapor-permeable thin layer of gold is applied to the counter electrode. The sensitive layer must be as large as possible in order to be highly sensitive. The water vapor passes through the gold layer into the pores of the sensitive layer and accumulates. Chemical sorption separates the water molecules on the surface into a hydroxyl group. Additional water molecules can now be bound to the hydroxyl groups by "Van der Waals" forces. The bound water molecules are now in equilibrium with the surrounding air humidity and influence the capacity and thus the conductivity of the "condenser". A measured value is then obtained by a comparatively simple impedance measurement. There is a good correlation to absolute humidity. The aging effects of the sensitive layer require regular calibration, which cannot be carried out by the end customer. The process is also not suitable for aggressive gases.

The quartz crystal is coated with a polymer that is sensitive to moisture. Moisture accumulates on this layer. The resonance frequency changes due to the changed mass. These small changes can be registered with great effort. This even works down to the ppb range. To achieve this, the temperature has to be controlled very precisely, since the fundamental frequency is significantly influenced by the temperature. There are, of course, significant cross-sensitivities to all soiling that can be deposited on the polymer layer. A high purity of the medium must therefore be assumed.

It is an absolute measurement method because phosphorus pentoxide (P2O5) reacts 100% selectively to water. There are no cross-sensitivities. In addition to the very fast response time from dry to moist, the main advantages of the AQUATRACE® trace moisture sensors are their robustness and their ability to easily tolerate corrosive components in gases (Cl2, HCl, F2, HF). In addition, they do not tend to drift the measured value at high humidity events. The sensors can be easily regenerated by the customer. The lower detection limit of the AQUATRACE® sensors is 0.001 ppmV ( parts per million ) or 1 ppbV ( parts per billion ).

Phosphorus pentoxide (P2O5) has a high affinity to absorb water in order to convert it into tetrametaphosphoric acid. It is an extremely hygroscopic salt. This property makes it ideal for building a moisture-sensitive sensor. The process goes back to the KEIDEL measuring cell developed in 1956. In contrast to the KEIDEL measuring cell, the sensitive layer of our AQUATRACE® sensor is applied on the outside. A decomposition voltage greater than 2V is present at two Pt-electrodes, which electrolyzes the metaphosphoric acid. This releases hydrogen and oxygen and the phosphorus pentoxide is again available for the absorption of water molecules. The P2O5 thus acts as a catalyst for the electrolysis of water molecules. The thus resulting hydrogen and oxygen are removed from the system by the gas flow. The measured decomposition current IM is a direct measure of the moisture according to Faraday's law. The volume flow must be kept constant for a precise measurement.

The method is not suitable for moisture determination in NH3 (ammonia).

The measuring method is based on a mirror, which is cooled slowly and in a controlled manner until condensate can be detected on it. The water vapor partial pressure at the dew point of the flowing gas is given by the value on the vapor pressure curve. The measuring process is very complex and time-consuming. A careful measurement presupposes that equilibrium conditions are reached. This can only be achieved by approaching the dew point approximately with the temperature regime and repeating it several times.

With the corresponding effort, an accuracy of +/- 0.1 ° C can be achieved. A major advantage to all other measurement methods that have been presented here is that there is a direct connection to thermodynamic data and this measurement method can be used as a standard measurement method. Disadvantages of the method are clearly the amount of time, the size of the measuring equipment and the purchase price. We use the dew point mirror as a test tool for our AQUATRACE® P2O5 sensors.